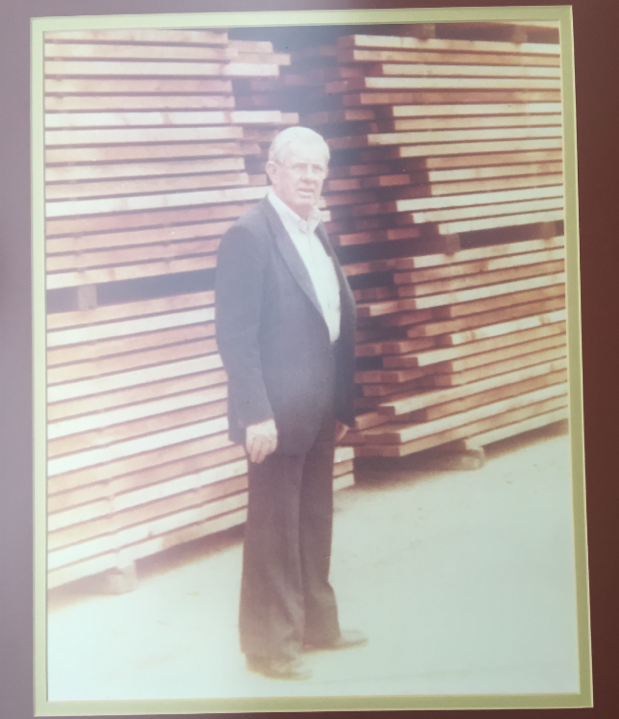 J.P. Haynes Lumber Company had its earliest beginnings in the woods and timberland in Cherokee and surrounding counties.  James Prentice Haynes, known then as Prentice, had a mechanical mind as well as a business mind.

He built a rolling sawmill, which some say was the first of its kind.  He could move his mill from one location to another by towing it with a truck.  His first source of power was a Buick automobile engine.  At one point he moved his family from his home in the sixes community to Dawson County, where they lived for a year while he cut timber and sawed it into lumber.  He sold his green lumber to lumber companies that had drying facilities and a planer.

Shortly after the end of World War II, Mr. Haynes purchased an abandon peach orchard in the Keithsburg community, just North of Canton.  It was on State Hwy No 5, which remains the current location.  One of the main advantages to this location was a railroad siding.  A perfect location for his new adventure.  He put in a planning mill and began buying green, rough sawn lumber from other sawmill operations.  He was in business selling dried and dressed lumber in April of 1947. 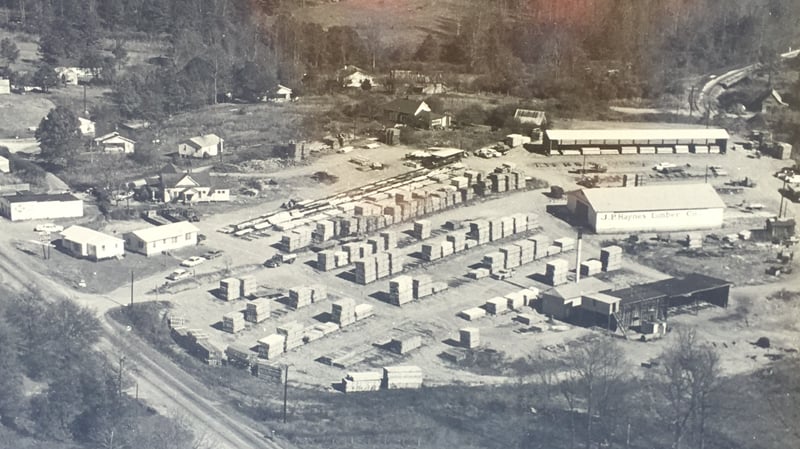 Taking advantage of the railroad siding and the demand for lumber just after the war, J.P. Haynes Lumber, as it was now called began shipping lumber by boxcars to places miles away.

When he first started the business, the green lumber had to be stacked and air dried.  This took about three months, and extra man hours.  So, in 1959 using again his business and mechanical mind, Mr Haynes built a modern sawmill with a de-barker and a chipper.  Also, he put in a dry kiln, which could dry the green lumber in about 14 days. He used the sawdust and bark from the sawmill for fuel to heat the dry kiln.  The shavings from the planer were sold to put in chicken houses. The wood chips from the sawmill were hauled to the paper mill in Rome, GA.  Nothing was wasted. 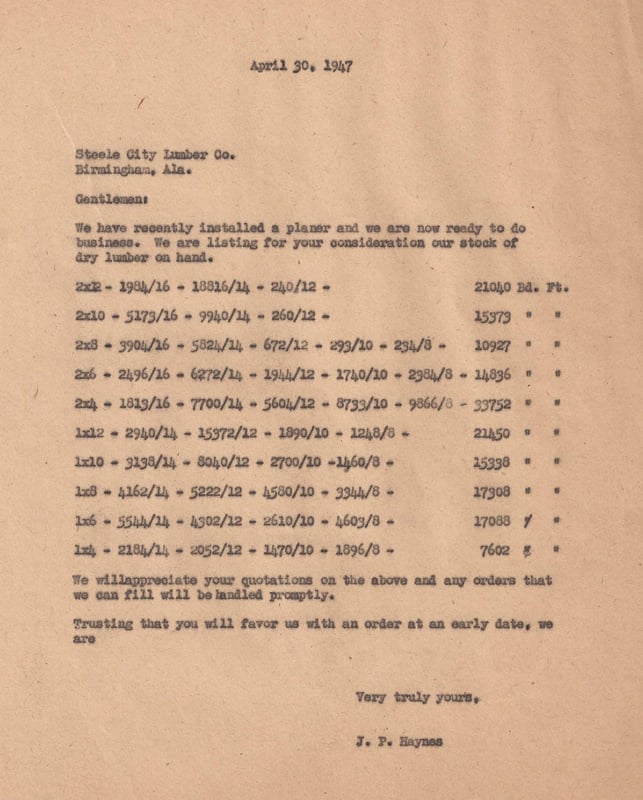 J.P. Haynes Lumber is in its fourth generation of family to work at the company. J.P. Haynes father, Mr Herchel Haynes, worked there some in his later years. Mr Haynes had three daughters, and one by one their husbands came to work in the business.  Alex Weatherby started in 1955, Hugh Thacker in 1960, and James Rogers in 1964. In 1978, Mr Haynes Retired and the 3 son-in-laws began managing the business.  After Alex retired in 1997, Hugh in 1999, and James in 2006, the five grandsons assumed operating the business.  They had all started working in the business after finishing school.

The sawmill and planning mill operation continued until 2001, when due to timber quality, high insurance cost, and a labor shortage, a decision was made to cease this part of the business.  The business began expanding to offer a broader range of building materials.

The business is currently operated by four of Mr Haynes grandsons, Lee Thacker, Jay Rogers, John Thacker, and Brady Rogers. Haynes Weatherby retired in 2015, after working there for 34 years.

The family business has been blessed to be located in a great community, with loyal customers, and faithful employees, several who have worked there over 30 and 40 years.

Learn More About Our Lumber Products

When it comes to providing high-quality lumber, J.P. Haynes Lumber Company is the lumber provider to trust. We will partner with you in completing your building project. Contact our staff today at (770) 479-3223 to learn more about the lumber products and building materials we offer. Our representatives will be more than willing to assist you with all your construction needs.